Google vs. Yelp: Which One Matters More? 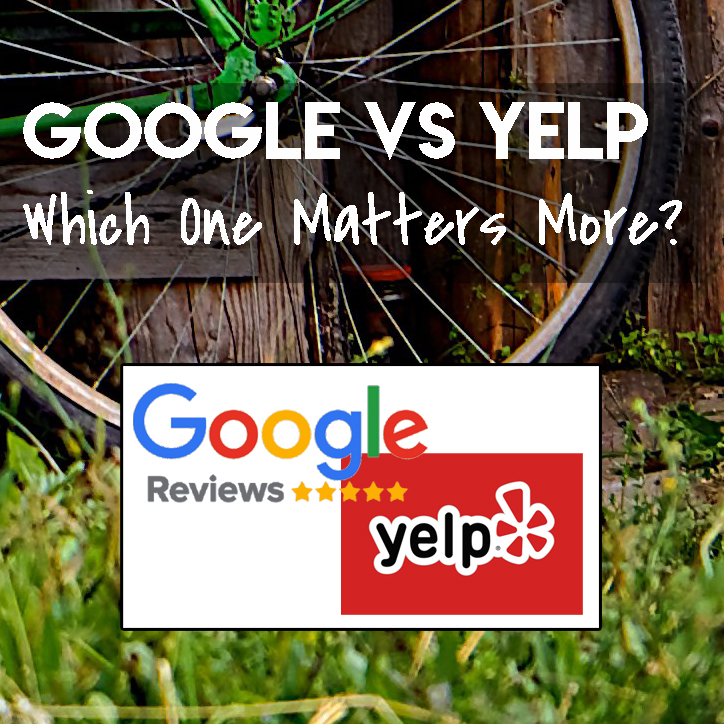 Google vs. Yelp - Which One Matters More?

There are all kinds of online review sites out there, Yelp and Google being two of the biggest.   Question is, which one should you focus your efforts on?  Short answer - focus on Google but don't ignore Yelp.  Here's the Why:

Google is the king of search these days and Google Reviews has surpassed Yelp and every other platform in the online review world.  Google makes it easier to leave a review, there's less competition at the moment, they don't get filtered the way Yelp reviews do and they help your local search engine rankings. What more could you ask for!

Where to Start - Google Business Listing

Before you can start collecting your Google Reviews, you need to have claimed your Google Business listing.  I hope you've already done this, but if you haven't, here's how:

Once your Google Business listing is active, complete your company information.  Add relevant information such as what you do, your business hours and any photos that might help to entice a viewer to click on your link.  Sell yourself!

Ask For Google Reviews from Your Clients

One of the things I really like about Google Reviews is that you can send a link to your clients asking for their honest reviews.  Yelp discourages companies from asking for client reviews.

Contact your existing clients and ask them to complete a testimonial for you.  If you make it easy for them, most are happy to oblige.  I've had great success with this and have had calls from prospective clients saying that they chose me because of my reviews.  So there ya go!

In 2017, Local SEO Guide looked at 200+ local ranking factors, such as “total number of words on page” and “number of photos,” to see which ones had the strongest effect on rankings in Google’s local pack.

Out of the top 10 most influential factors, nine of them involved Google reviews:

Remember how I keep talking about how Google is after the user experience?  Well there's further proof right there.

Google has leveraged mobile in a big way, especially with Google Maps.  Google knows all... or should I say GPS tells the story.  If you allow Google Maps location access and you go to the business that you'd searched on, you'll get a request to review them right there on your phone.

Be creative and use this to your advantage!  If you're a restaurant or brick and mortar store, ask (nicely) for the review!   Put it on the sales ticket with a happy face, or something like that.  Be gracious but don't be afraid to ask!

Google Reviews Generate Positive Responses Even if You're Not Ranked #1

The Necessity of Yelp... For Now

I was going to write "necessary evil of Yelp" but that seems a bit harsh.  It seems like every time the discussion of online reviews comes up with fellow small business owners, the comment is always the same: "I hate Yelp."

Businesses that don't want to be on Yelp are forced there when a customer leaves a review for them. Good, bad or indifferent, once that review is there, so are you as the business.  Yelp has had a strong following for quite some time now so you can't exactly ignore it.  Like it or not, people see those reviews and respond accordingly.

One of the biggest complaints about Yelp is their filtering policy.  Yelp actively suppresses reviews that they feel are in violation of their guidelines, are fraudulent or overly positive or negative.  Unfortunately, legitimate and honest reviews are sometimes caught up in the filter, never to be seen by other potential clients.

Yelp also seems to have garnered a reputation for "bullying" businesses into advertising with them.  And when they decline, well I've heard more than one person say that they feel penalized by not doing so.  Negative reviews at the top of the page, positive reviews disappear; stuff like that.  Again, I've had this same conversation with several people and the frustration is across the board.  Now whether or not this is actually true remains to be seen, but perception is king.

As consumers, we use Yelp all the time.  It's our go-to for finding local restaurants, repair services and retail shops. We read reviews, filtering out the poorly written, negative ones that appear to be nothing more than whining because someone didn't get something just the way they wanted it.  What's even more meaningful to me as a marketer is how the business responds to those negative reviews;  that to me says everything about the business in question.

So my comment back to people who "hate Yelp", like it or not it's there, at least for now. Make the best of it.  Yelp's future is certainly in question with a declining stock price and failing reputation. I'm not sure how much longer they'll be in the picture.

Reviews aren't perfect, but they are a valuable insight into the type of business that you operate.  Make time to grow your online reviews, just like you make time for your social media posts.  It's all a piece of your marketing puzzle.

And keep in mind that how you respond as a business owner, to any positive or negative review, says everything about your business.  It's your chance to shine and to give the potential customer an insight into the type of business you are. Take advantage of that opportunity no matter what platform you're communicating on!

To learn more about how to manage your marketing strategies, subscribe to my newsletter and follow me!