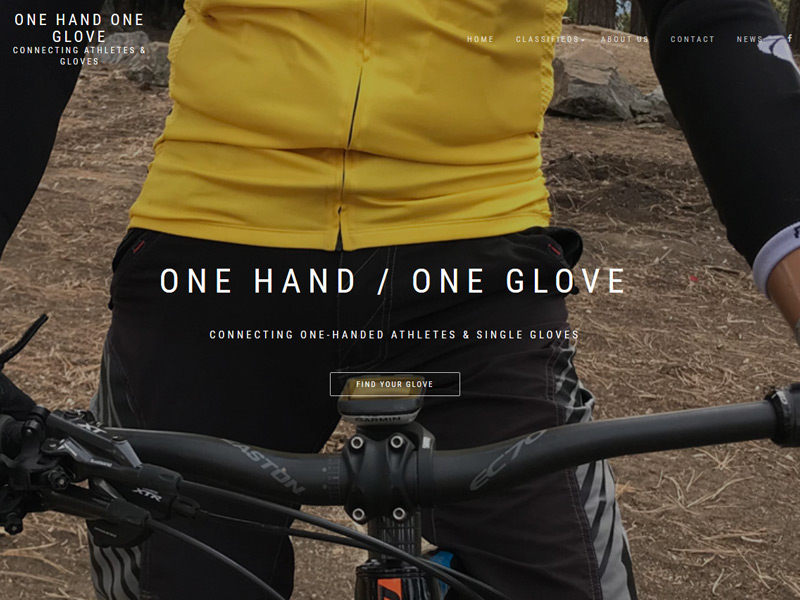 So this one’s my baby…

Hi there and welcome to OneHandOneGlove.com, affectionately known as the Five Finger Discount site!

One Hand One Glove is a classified ad website geared to connecting one-handed upper-body amputees that have unneeded gloves stacking up around the house with other (opposite arm) amputees. My goal, simply put, is to connect people and gloves. I don’t know about you, but we have a bunch of brand new, unused, really nice gloves here. They need a home.

My partner in life, Robin Brown aka Captain Hook, is a below the elbow amputee on his left side. To say he’s extremely active and athletic would be a huge understatement. He’s done the Leadville 100 MTB race three times, the Belgian Waffle Ride, Barnburner, Rock Cobbler, Crusher in the Tushar, etc. etc. He puts the time in on the bike. Which means he goes through gloves like crazy. Which means he buys more gloves. Which leads to more lonely left-handed gloves … you get the picture? Like I said, these left-handed gloves need a home. Anyone need a left-hand XXL cycling glove? We have plenty. I’ll make you a deal! And I bet if you need a left-handed XXL cycling glove, you might just have some rights hanging around. Right? (No pun intended there.)

So about me – I’m Laura. I’m a digital marketing, web designer girl who decided it was time to do something creative to get rid of, ahem, sell, Robin’s extra gloves. I figure given the websites I’ve built and the social media networking I’ve done, I should be able to come up with a classified ad website that people can use to sell (or trade) their gloves. Ta da – OneHandOneGlove.com. By the way, Five Finger Discount is his idea.

Our big picture goal is to develop this site into a non-profit with proceeds going towards putting on fundraising cycling events. I don’t want to charge the users of the site a fee (like eBay) for selling their gloves here. I’d like to procure some advertising dollars and ultimately grant money to sustain the site and whatever promotional events we get ourselves into. We seem to be good at that.

All that being said, thank you for stopping by. If you have any feedback, questions or difficulty in using the Classifieds, drop me a note and I’ll get right back with you. And please share us on Facebook and Instagram so we can spread the word. The more gloves, the more useful the site is for more people.